I'm allergic to most forms of platitudes and marketing speak. Phrases like “Crush it!” and “Fake it until you make it!” top my list of eye-rolling phrases that have lost all value because they are uttered so often. The same for “dropping knowledge bombs” or “dropping value bombs”, both of which rank up there as well.

Except when it’s warranted.

What Mike Carruthers of the podcast Something You Should Know said during the live taping of Podcasters' Roundtable last week is worthy of that label, no matter how much I don’t like the label. And no matter how much you may not like the bitter pill you’re about to hear.

Now, Podcasters' Roundtable can be called a lot of things, but it’s certainly not a contest where the hosts and guests try to one-up each other. But even though it’s no contest, all of us agreed that Mike won the episode with this reveal:

20% of the interviews he conducts for Something You Should Know don’t make as a published episode. They’re never heard by the audience of the show.

Why? Because they aren’t good enough for Mike.

And that’s after a lengthy discovery, vetting, and screening process that even includes a video from Mike himself that tells the guest—in great detail—what is expected of them during the interview. They know that they need to bring their A-game and be engaging, energetic, and entertaining during the interview.

That’s one in five.

Imagine if every fifth week the guest you had lined up for your released-weekly interview-based podcast wasn’t up to snuff and you had the intestinal fortitude to not to air that episode.

Paraphrasing what I said during the taping, I wish more podcasters cared so much about their show that they too would only allow the highest quality episodes to be heard.

Making Room In Your Podcasting Process For The 20%

I know it’s hard to make the gut-wrenching decision to not air a guest. I know it feels like you’re cheating the guest out of their time. And I know how much you do not wish to view your time as a sunk cost.

But that’s what it is.

It’s also hard to make this choice if your recording schedule mirrors your production schedule, which in turn mirrors your release schedule. If you, like far too many podcasters, squeeze recording, producing, and releasing all in the same week, you’re kinda stuck when a guest sucks.

Without building in a buffer, you don’t have the ability to care as much about your show as Mike does his.

So… maybe rethink your process and build in some buffer time? If Mike’s tossing out 20% after all that screening to ensure his popular podcast continues to meet his high standards, how many low-quality episodes are you publishing?

And nobody wants to listen to not-great episodes.

No, I mean that. Literally no one wants to listen to not-great episodes.

Sure, your loyal fans will forgive you for the occasional not-so-great episode. But if every four or five episodes is not-so-great, then that occasionality becomes a pattern. Perhaps an unforgivable pattern.

Now think about the all-important first-time listeners. Do you really want their first experience with you and your show to be with a not-so-good episode? No, no you don’t.

At least I don’t think you do. I know I don’t want that. But only you can determine your tolerance is for subpar quality.

I'll just gently (?) remind you that every day, podcasters in your niche are seriously stepping up reinvesting in the quality of their shows. Every day, professionals with years of media experience are tirelessly making their shows more attractive to their listeners, as well as drawing audiences away from subpar shows. Every day, listeners are finding amazing podcasting content from podcasters that do not truck with subpar episodes. And those same listeners are finding they have less and less room in their media consumption diet for shows with inconsistent or sub-par quality.

Are You Going To A Podcast Conference in 2021?

Podcast Movement ‘21 is coming up in just a few days and no, I will not be attending in person. Instead, I've blocked the days on my calendar and will virtually attend from my own living room. I'll be engaging and interacting as much as I possibly can, so I hope to “see” you there.

But I will, however, attend the ShePodcasts conference live and in the flesh this coming October. So if you're coming to the event in Scottsdale (which is only about 20 minutes from my studio in mid-town Phoenix), I would absolutely love to meet up! We can do it at the event, get breakfast before, have drinks after… you name it! Drop a note to me—evo@simpler.media—and we shall find a time to meet.

And finally, if my retelling of Mike Carruthers’ value bomb was valuable to you, please consider lending me your support by buying me a virtual coffee—or maybe 12 virtual coffees—on BuyMeACoffee.com/evoterra.

Not every guest you interview is going to be amazing. Not every monologue you write is going to be stellar. There's no way to fix that reality. What do you do with a subpar episode? Don't release it.

I'm allergic to most forms of platitudes and marketing speak. With "Crush it" and "Fake it 'til you make it"  topping my  list of eye-rolling phrases. Dropping "knowledge bombs," or dropping "value bombs" is another one of those. Except when it's warranted.

Last week was my fifth appearance on Podcasters' Round Table where I joined, oh gosh, longtime podcasters, Dave Jackson and Ray Ortega, along with Mike Carruthers, who I just mentioned a moment ago. Podcasters' Round Table is just a fun, casual conversation. And it's certainly no contest, but all three of us, and Mike probably himself included, we agreed that Mike won the episode. Again, there is no contest of these episodes, but Mike clearly won the episode when he revealed that 20% of the interviews he conducts for Something You Should Know, 20% of those interviews don't make it on the show.

Now, why not? Well, simply because the content isn't good enough. And Mike cares deeply about the content of his podcast. And when a  guest doesn't cut it, he doesn't put the guest on.

Now, that's even with Mike taking the time to record a video that details out in exacting detail, what is expected of a guest. So when they reach out to guests and they vet guests and they send them this video and the guests say, "Yes, I got it. I know exactly the kind of energy and entertainment you want me to bring to the show," 20% don't make it. That's one in five.

If you do an interview show, perhaps you do that interview show once a week. Imagine if every fifth week the guest you had lined up, didn't cut it. And then you decided not to air that episode. That's quite radical, I think. And as I said on the show, I wish more podcasters would take that approach. I wish more podcasters cared as much about their show or cared so much about their show that they too would refuse to air an episode that wasn't of the highest quality.

Now, that's hard. I mean, I get it. Especially if your recording schedule mirrors your production schedule, which in turn mirrors your release schedule. If you do all those things in one week, produce it - you know, record that guest, produce that episode and release it all in the same week, which most podcasters do, you have no built-in buffer. You don't have the ability to do what Mike does for his show and that's make sure none of these shows, none of the episodes, ever air that aren't of the best quality. If you don't have that built-in buffer, you can't do that.

Now, think about the all-important first-time listeners. Do you want their first experience with you and your show to be a not-so-good episode? Is that what you want them to hear?

Now look, this is me. Only you can answer that question. Only you know what your tolerance is for subpar quality. So I'll just remind you that every day, podcasters in your niche are seriously stepping up and improving the quality of their shows. Every day, professionals, some with years of media experience, are making their shows more attractive to their listeners and drawing audience away from subpar shows. Every day, people are finding amazing podcasting content that does not, in fact, truck with subpar episodes. And they find, those people find they have less and less room in their media consumption diet for shows with inconsistent quality. So don't let your show be a statistic. The best way to control your podcast's quality is you control your podcast's quality.

Now, some quick housekeeping, Podcast Movement '21 is coming up in just a few days and no, I will not be attending in-person. I will be attending virtually, however. I've blocked the entire week and plan on watching from the comfort of my own living room, where I'll be engaging and interacting as much as I possibly can.

Now I am, however, planning on attending in-person ShePodcasts. Yes, I will be attending ShePodcasts in-person in October of 2021. So if you're coming to Scottsdale, Arizona, which is just around the corner, I would absolutely love to meet up with you at the event or out for drinks after the event or before or whatever. Just drop me a note, evo@simpler.media, and we shall find a time to meet.

And finally, if my retelling of Mr. Mike Carruthers’ value bomb,  if that was valuable to you, please consider lending me your support by buying me a virtual coffee—or maybe 12 of those — on BuyMeACoffee.com/evoterra. 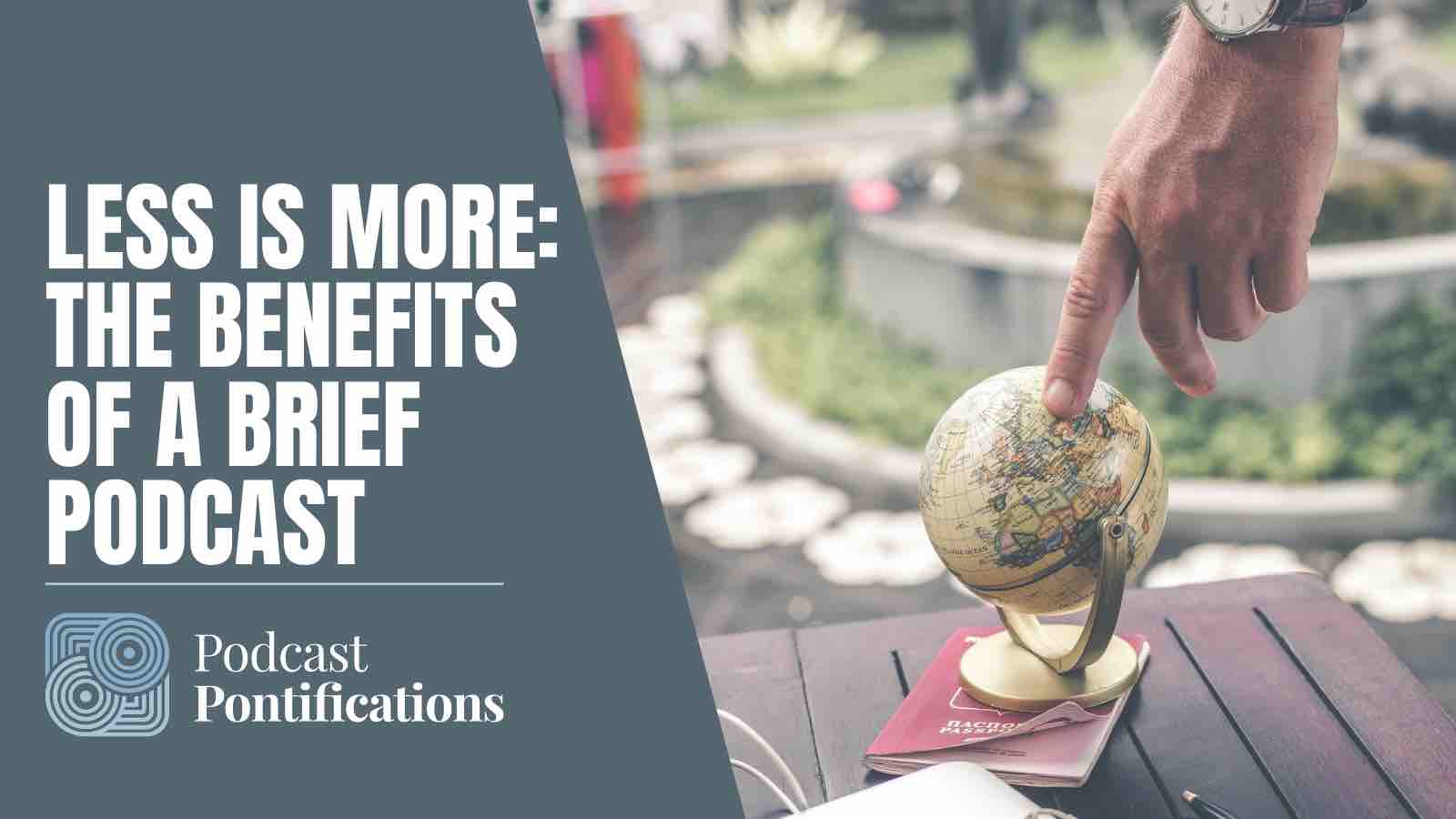 Less Is More: The Benefits of A Brief Podcast

Two decades and millions of podcasts later, it's likely what you want to talk about is already talked about. But if you're not afraid of doing things differently, you can still make a splash with your new show. 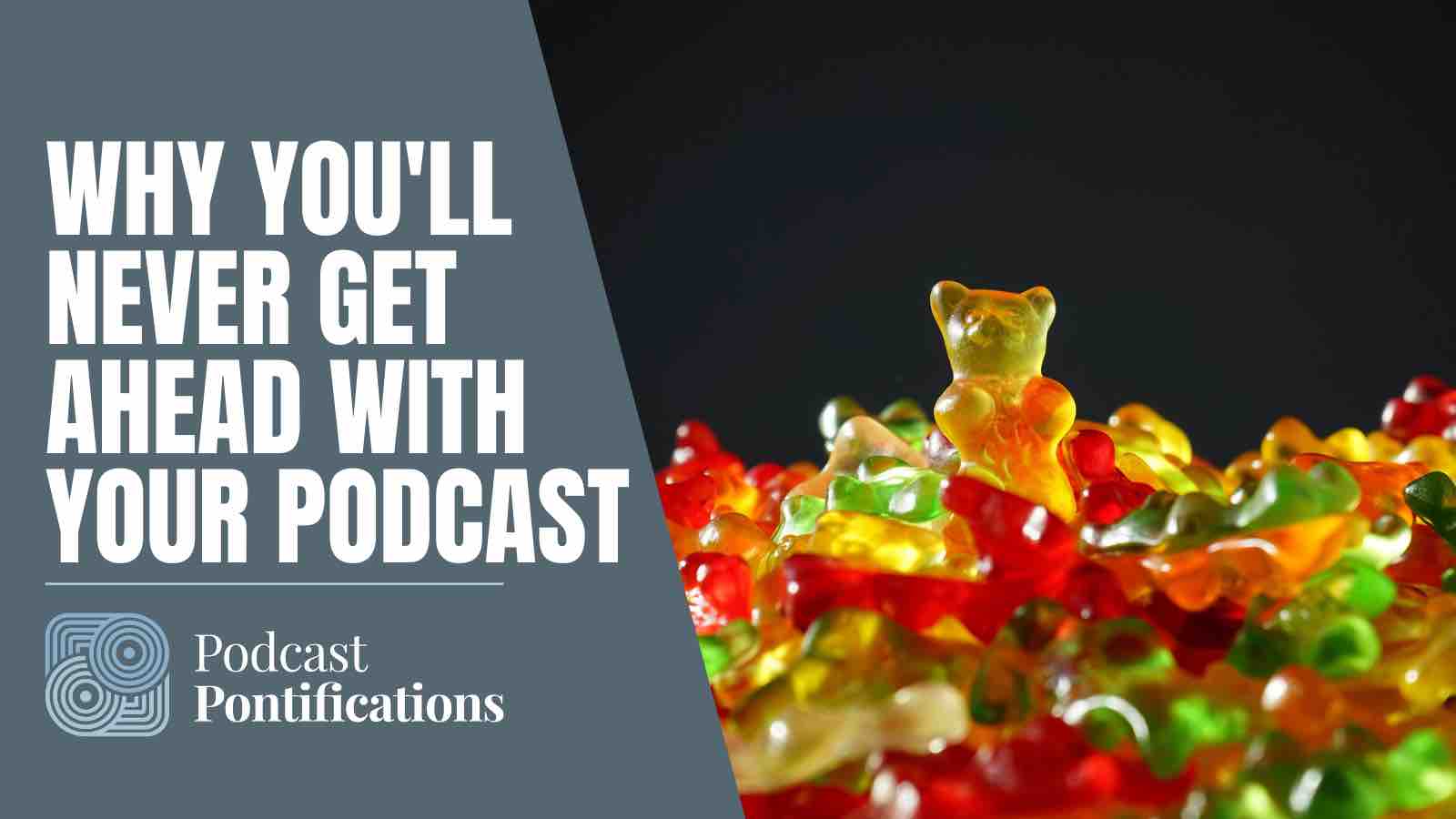 Why You'll Never Get Ahead With Your Podcast

A lot of podcasters live episode-to-episode, dreaming of getting ahead so they aren't always rushing to get an episode produced and publish. For many, that's an achievable dream. The trick is staying there. 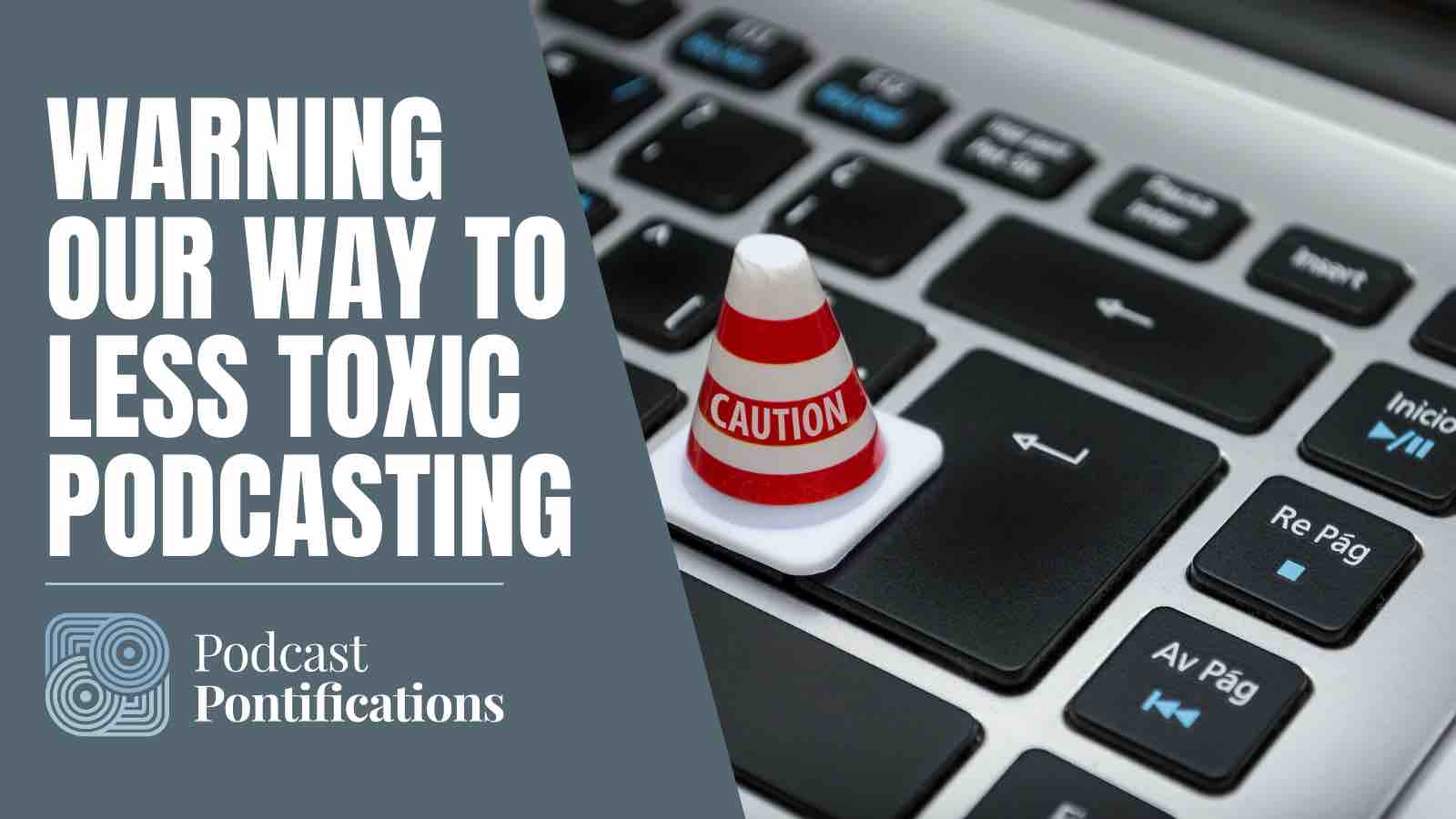