The Not So Sad World Of Podcast Follower Remorse
ArticleVideoTranscript
Download AudioAudio InboxComments
No items found.

If you or I found ourselves in that situation, where a show in our subscription or follow list was no longer for us, we'd unsubscribe or unfollow that show with haste.

If I've just described your behavior every single time, then kudos to you. But that's not most people's behavior.

Most people, especially the more casual listeners of podcasting, tend not to unsubscribe or unfollow. Anathema, right?

But I'd bet you don't unsubscribe or unfollow shows you've stopped listening to as often as you think. Even for shows that don't pan out the way you had hoped.

Beyond Binary Thinking About Podcast Followers

We know that's wrong because we see it in the data. Compare the download metrics from any podcast's hosting provider to the listen metric from the podcast apps and the reality stares you in the face. Reality, as is often the case, is messy.

Reality dictates we should learn to embrace this "middle" listener. No, that's the wrong word. The "middle" subscriber or follower. Because they don't listen as much as we'd like.

A quick caveat for the producers of serialized podcasts, like fiction, docuseries, or other multi-part contiguous content: you probably don't have this problem. At least not to the same extent, as your content is designed to be listened to in order, without skipping an episode. You're not immune from this, but the problem probably isn't as acute.

The Rise Of The Middle Follower

There are a lot of behaviors wrapped up in this concept of a middle follower. In most cases, middle listeners had every intention of listening to every episode of the podcast they subscribed to or followed. Chances are, they started out eagerly consuming your episodes, but then stopped. For whatever reason.

Maybe they got everything they needed from you and your podcast after listening to just a couple of episodes and are keeping the connection in case they have new needs.

Maybe their interest in the topic your podcast covers slowly waned over time.

Maybe they discovered and prioritized a different podcast or a different set of podcasts that better fits where they are today.

Maybe they're very good at triaging their podcast listening app, deliberately choosing which episodes to listen to, using their own decision tree or sorting methodologies to make decisions you just can't know about or influence.

Maybe they keep the subscription or following active as a show of solidarity for your show or yourself, like some fort of a badge that says they are part of your tribe.

Or maybe they view your feed updates as transactional, keeping you and your show top of mind for them, and weirdly happy enough just to know you're still producing content because maybe someday they'll listen.

It's Easier To Ignore Than To Unfollow

For people like you and me, unsubscribing to or unfollowing a show isn't a major tech hurdle. We know how to do it. But for a lot of the more casual listeners, I don't think that's the case.

Consider what happens when your inbox gets full of email marketing sends you don't care about. In each of those unwanted—to you, at least—email messages is a clear and obvious "unsubscribe link". It's right there when you're reading the email and decide it's not for you.

So you have to bounce back up, out of your listening queue, to the show's listing in your app, and then look through the settings or some other indicator to chance your following/subscription status. Sure, some apps make it a simple swipe to remove a show completely, but most don't.

It's not very easy. Not nearly as easy as that trade commission-mandated unsubscribe link in every email marketing send.

What should we do about these middle followers? Anything? Should we wish for a way to clear out those who've stopped listening just so our listening stats match up with our download stats? No, I don't see much value in that. No one incurs any significant costs in keeping the connection active. And you never know when a lapsed follower might again become an active listener.

Should you try to convert as many of these middle followers to dedicated listeners as you possibly can? Well, yeah, of course. But that's something that's probably not very much in your control. You don't know why someone became a middle follower in the first place, right? So you'll have a hard time figuring out what you need to change to make them into a dedicated listener. Again.

But that doesn't mean you should stop trying.

I'll have more thoughts on this concept of middle followers as the season progresses, but for now...

Your podcast is followed by lots of people who don't listen. So is mine. So is everyone's. Is that a problem to be solved? Or just a reflection of the complex relationship people have with on-demand content?

In case my meaning isn't clear, I'm talking about someone who took the time to add your podcast to their listening app and now they kind of wish they hadn't. For whatever reason, it's no longer for them. Here's what you and I would do in that situation - if a show in our subscription or follow list was no longer for us, we'd unsubscribe or unfollow that show with haste. Or would we?

If I just described what you do every single time, then kudos to you. But that's not most people's behavior. Most people, especially people who are more casual podcasting listeners, tend not to unsubscribe. I know, anathema, right? But you probably don't unsubscribe or unfollow as often as you think you do, even for shows that don't pan out the way you had hoped.

My problem here is this is thinking about a problem in a binary way and you know how much I despise binary thinking. See, we think that people either subscribe or follow because they want to listen and then when they don't want to listen they unfollow, they unsubscribe, right? But the data we can all see, comparing our download numbers to the listen metrics from the apps, clearly demonstrate that thinking is wrong. Reality oftentimes is it's more complicated. Human behavior, as it turns out, is rather messy.

We podcasters need to embrace the reality of the middle listener. Or the middle follower or subscriber I should technically say since it's not a listening issue here because this middle person only listens to some of our episodes.

Now, a quick caveat here, creators of serial content, fiction podcasts, docu-series, or other multi-part contiguous content see very different behavior than what I'm describing. They're not immune from this, it's just different.

This middle person actually represents a lot of different behaviors. Some of the people who are middle listeners had every intention of listening to every episode that you put out, but they just don't. Perhaps they started out eagerly consuming your content, but then stopped for whatever reason.

Maybe they got everything they needed from you and your podcast with a couple of episodes and just left it there.

Maybe their interest in your content or the topic that your podcast covers waned eventually.

Maybe they discovered and prioritized a different podcast or a different set of podcasts.

Maybe they're very good at triaging their podcast listening app, deliberately choosing which episodes to listen to with their own decision tree and sorting methodologies.

Maybe they subscribe or follow in a show of solidarity or in support of that show, either with you or with others who have your show in their lives. Maybe that was important for them to have that badge that I'm a subscriber. But I'm not really a listener.

Or maybe they just view your feed updates as transactional and they're happy just knowing that you're still producing content. That's good enough because maybe someday they'll listen.

And finally, it's not that easy to unsubscribe or unfollow a podcast, at least not while you're actively listening to that podcast. Here's the deal, if I subscribe or perhaps someone subscribes me to an email list that I don't really want to be in, there's an unsubscribe button right there in the email. Where is that in podcasting? We don't have it, not at the episode level. There is no easy way to bounce back up to the show level because there's not some obvious unsubscribe button, at least not like the ones mandated by various trade commissions that are for email.

Sometimes, yeah, it is a simple swipe to delete, but oftentimes, listeners have to go into the configuration or to the settings of their program, their app to actually do the work. That's not very easy, is it? So do we really care about these middle followers, if you will, who don't want to, or at least don't want to go through the hassle to unsubscribe or unfollow, but they also don't want to listen to every single episode? Should we try to clear them out to keep a cleaner feed?

I'm not so sure there's a solid reason of why to do that. It costs them virtually nothing to keep updated about your new episodes. Perhaps you're even sending them episodes they don't listen to and that's okay because you never know why they don't listen and they might actually start listening again.

Should we try to convert as many of these middle followers to dedicated listeners as we possibly can? Well, yeah, of course, but that's something that's probably not very much in our control because we don't know why someone became a middle follower. We don't know what to change to make them into a dedicated listener. We just don't know. But that also doesn't mean we should stop trying.

I'll have more thoughts on this concept of middle followers as the season progresses. But for now, I shall be back tomorrow with yet another Podcast Pontifications. 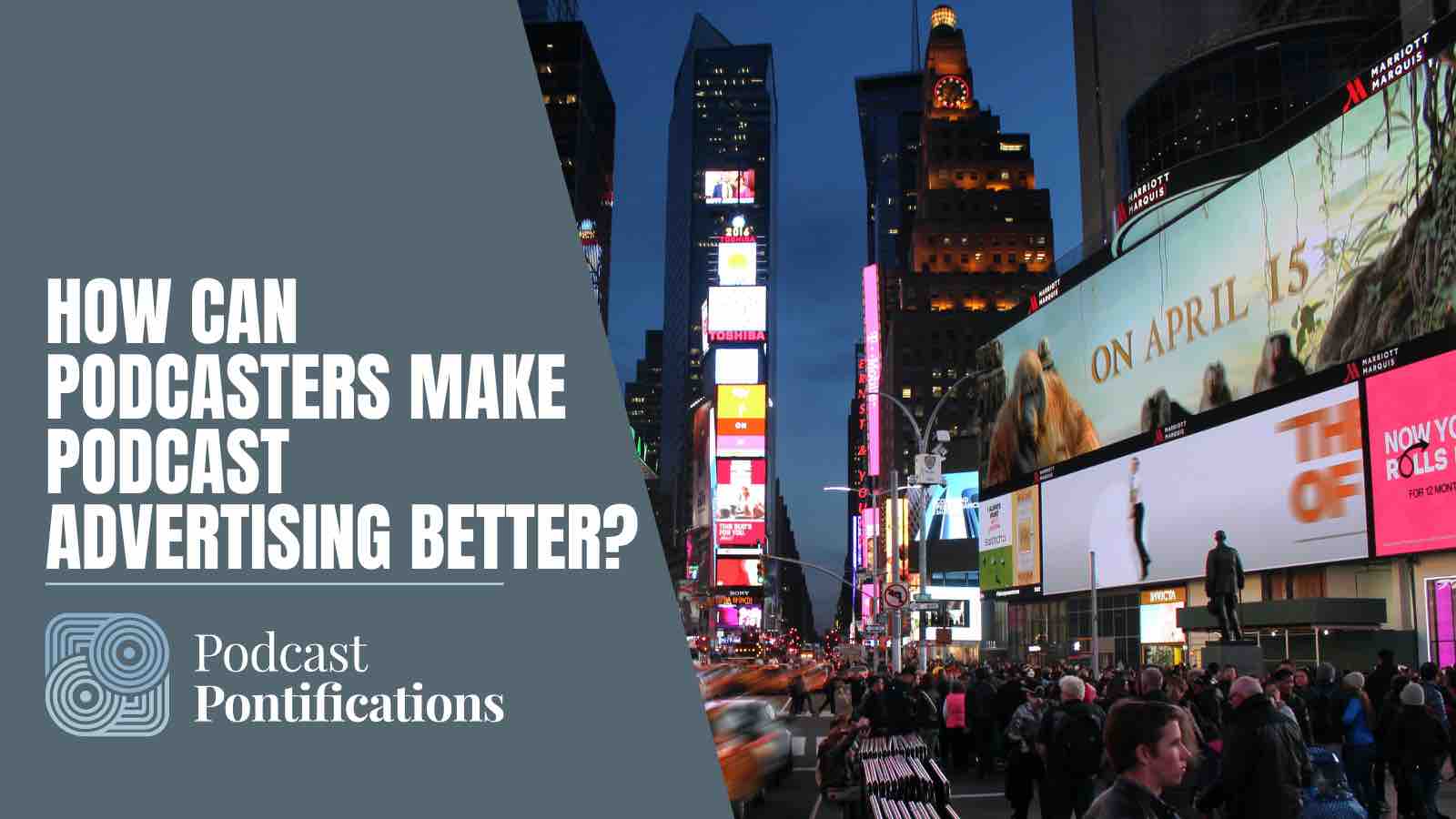 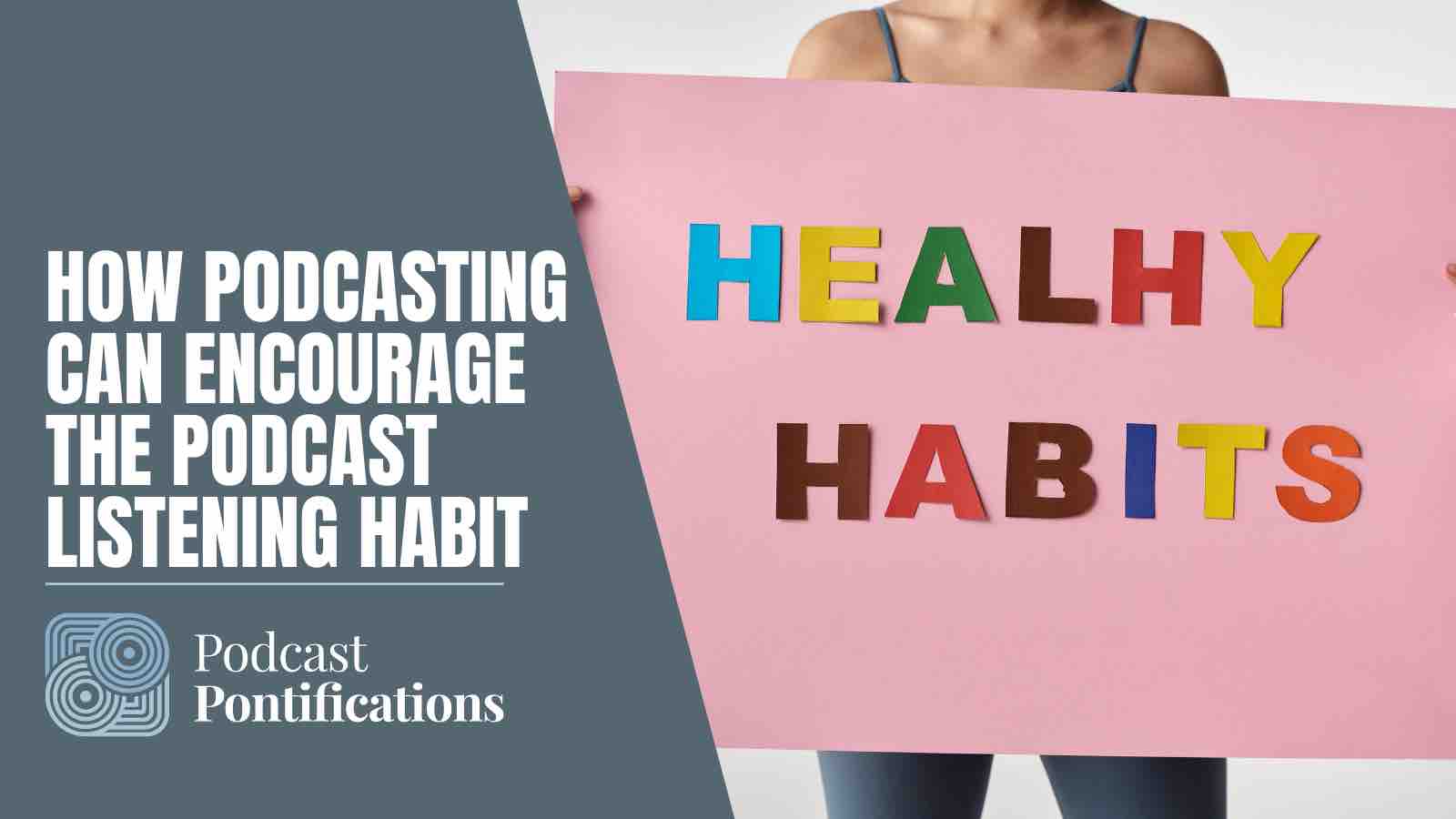 How Podcasting Can Encourage The Podcast Listening Habit

Podcasting is like crack for your ears, many have said. Listen once, and they're hooked for life, right? Well... wrong. What do we need to do—as podcasters and an industry—to help build listening habits? 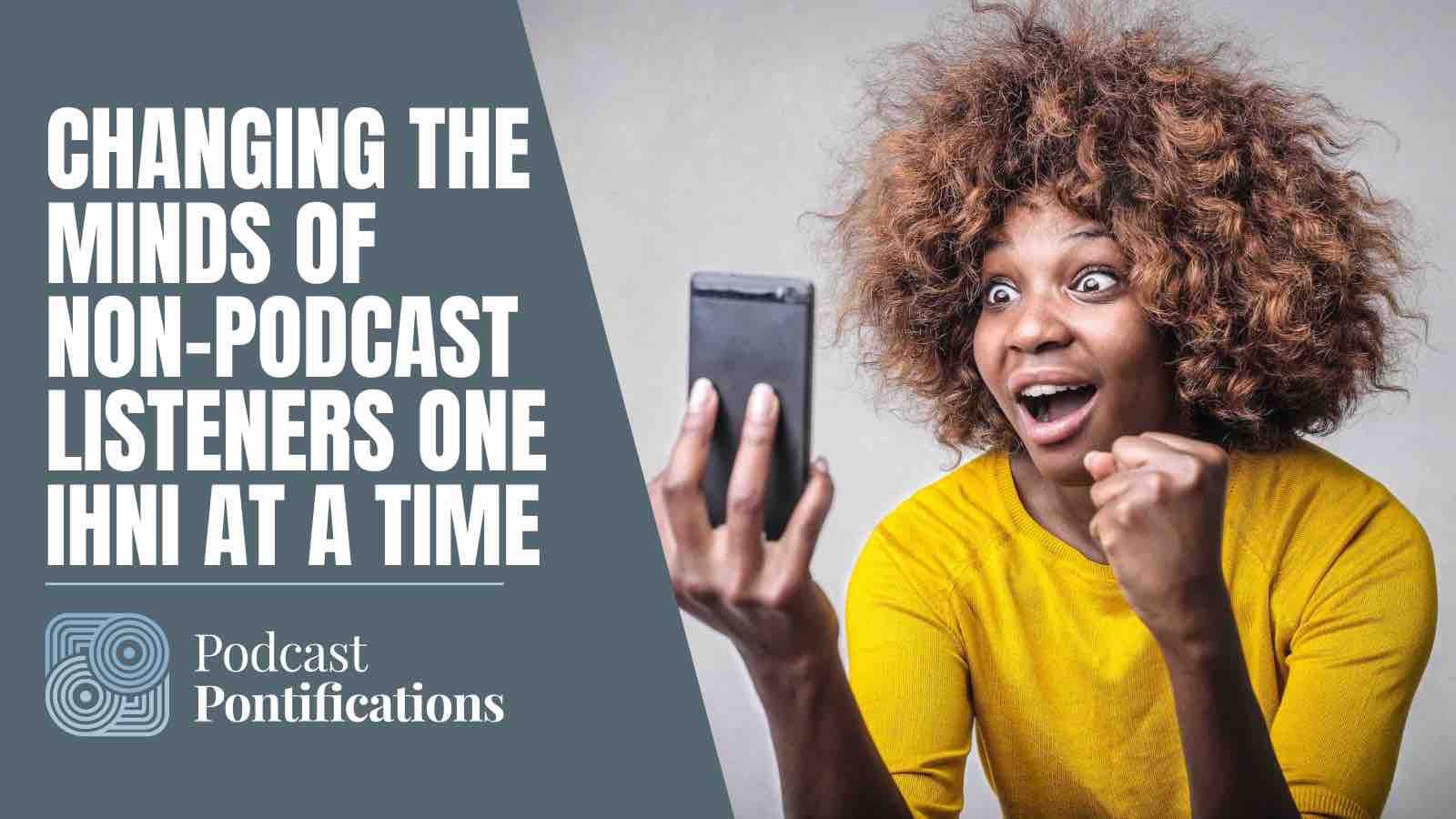 Podcasters have a lot of jobs. One we don't often think of is being ambassadors for podcasting. But it's an important job if we're to grow the entire podcasting pie. Start by having some IHNIs at the ready.