I'm not one to lament the death of public figures. Not that I'm a callous person. It's just that…well, death happens. And at least when a public figure dies, we can always refer back to their body of work.

But I spent a lot of time yesterday rewatching clips of Norm MacDonald, a comedic legend who passed away yesterday at 61 years young.

You may not have found Norm MacDonald all that funny. You might not even know who Norm MacDonald was prior to yesterday. Or perhaps right now. Those realities speak volumes about who Norm was.

I like the idea of being known as a podcaster’s podcaster, don’t you? With that, here are three lessons podcasters can learn from the life of comedian Norm MacDonald.

1. Know What Aspects Of Podcasting You Are Really Good At

This harkens back to the advice given by Tom Webster of Edison Research that I broke down a few weeks ago, but with a subtle twist: Know who you are and who you are for. And sure, why they are there. That’s still important.

Norm was quite good at a lot of aspects of comedy, but there were many he’s on record as saying he didn’t really enjoy. However, Norm was a master of the fundamentals of comedy, which is why he had a long career writing for comedy and was able to take the concept of comedic timing to an absurd extreme.

As a podcaster, you’ve acquired a variety of skills. You know there’s more to podcasting than just sitting behind the microphone, asking questions, or editing audio, right. You know that you don't have to be great at every one of those aspects. Nor do you have to enjoy doing every single “job” of podcasting. In fact, podcasting is already at a point where you can, if you choose, specialize in particular areas of podcasting. And you probably should do that, so you can get really good at a few of them.

2. Surround Yourself With Others Who Are Really Good At Podcasting

I don't assume to have any sort of special knowledge about Norm's private life. But I know that he traveled in an elite circle of comedic greats in his professional life. Perhaps that was helped by the fact that comedians—particularly stand-up comedians— are inherently more social than solitary podcasters toiling away.

Not that we should surround ourselves with our podcasting doppelgangers. Norm palled around with comedians with wildly different comedic styles than his. Nor should you work to become a sycophant to the biggest podcast stars. Norm’s buddies weren’t always the most in-demand comedians of the day.  Tastes change, in comedy and in podcasting, even though the mechanics and the fundamentals stay relatively constant.

Looking Back on 9/11. A podcast series hosted by Tom Fox with guests Gabe Hidalgo, Juan Zarate, Alex Dill, Eric Feldman, Scott Moritz, and John Lee Dumas, where they all reflect on 20 years after 9/11.

American Vigilante is about saving abducted children; it’s stepping beyond the law. It’s rescue missions, assassination attempts, and last-gasp protection. It’s all the stuff you hope never comes to you until it does.

Sounds Profitable helps you understand how you can take advantage of podcast adtech to stay ahead of the curve and, well…make more money as more money from advertising pours into podcasting.

‍
(Want to see your podcast listed here? Get in touch!)

3. Don’t Try To Please The Audience

Arguably the most counterintuitive podcasting advice you’ve heard all day, but that’s Norm for you.

Throughout Norm’s career, he tried a lot of different things. Many things that, for many people, just didn’t work. I’d be surprised if 25% of the people I’ve known in my life would put Norm’s name on a list of the greatest comedians of all time. And a full 50% of my acquaintances probably don’t find him funny at all.

Ignoring the fact that 100% of that 50% are so very, very wrong, there’s this: Norm didn’t care. Few comedians try to appeal to everyone, but Norm took that to an extreme. He’d happily tell a joke on stage that maybe one or two people in attendance would get. Though those two people would be howling out peals of laughter.

Instead, Norm knew that there was a good chance that somewhere in the audience were people who he was for. People who groked his approach to humor. Maybe that was only one or two people. Maybe it was half the room. It didn’t matter to Norm. He didn’t so much play to “his people” as much as he played to a particular kind of person.

That’s not playing to the audience. That’s having confidence that an audience for you is out there.

Thanks for the laughs, Norm. You were and remain an inspiration to me in all things I do.

If you found value within this episode, please consider passing some of that value back to me. You can do that a few different ways. One is with BuyMeACoffee.com/evoterra. Another is by considering a sponsorship of the program. Details at PodcastPontifications.com/sponsor.

What's great about podcasting is that not everyone needs to get you or your podcast. That was one of the great things about Norm MacDonald as well. A comedian from whom podcasters can learn a thing or.

I'm not one to lament the death of public figures. It's not that I'm a callous person, it's just that, well, you know, death happens, and at least when a public figure dies, we can always refer back to their body of work. So I spent a lot of time yesterday rewatching clips of Norm MacDonald, who passed away yesterday at 61 years young, September 14th, 2021.

Today's episode is not to try and convince you what a brilliant comic that Norm MacDonald was, even though he was one of the greatest comedians of our generation. No, I'm just here talking about the fact that Norm was a comedian's comedian. It's interesting, and I think there's a good chance that you might want to be known as a podcaster's podcaster, right? So with that, here are three things I think that podcasters can learn from the life of Norm MacDonald.

You see, Norm was really good at a lot of aspects of comedy, but certainly not all of them. He didn't enjoy doing all of the aspects of comedy. He was a master, however, at the fundamentals, which is why he did a lot of comedy writing and why he took the idea of timing to an absurd level. That's how good he was at this.

Now, as a podcaster, you know there are a lot of moving parts when it comes to podcasting, not just sitting behind the microphone or asking questions or editing audio. And you know that you don't have to be great at every one of them. You don't have to enjoy every single aspect of podcasting, and you can definitely specialize in certain areas. But one of the things you have to be really good at is the fundamentals and the mechanics of what makes podcasting work. Just like Norm understood the fundamentals and the mechanics of what makes comedy work.

Number two, surround yourself with others who are really good at the art of, in our case, podcasting. I don't assume to know much of anything about Norm's private life, but I do know that in his professional life, he traveled in an elite circle of comedic greats. Maybe it's the fact that comedians are just inherently more social, particularly stand-up comedians who contrast greatly with the often solitary toiling of us podcasters. Still, we podcasters have lots of opportunities to be social, and we can, to a large degree, pick and choose which other podcasters we want to spend our time with, which podcasters we want to collaborate with.

Not necessarily clones of what we do. Norm palled around with comedians who were wildly different from his comedic style, and the people he palled around with weren't always the most popular, most relevant by today's standards of comedians. Hey, look, styles change. What people want from a comedian on stage or in a movie change from time to time. However, the mechanics and the fundamentals stay the same.

Number three, don't try to please the audience. It sounds weird for me to say that, but throughout his entire career, Norm tried lots of different things in comedy, and many of them for most people didn't work. I'd say that of the people I know in my life, less than 25% would list Norm MacDonald as one of their favorite comedians, and probably less than half overall think he's funny.

But he was funny. Not to everyone. Few comedians are actually trying to be funny to everyone, but Norm took that to an extreme. This guy would happily tell a joke during a roast, which he was great at, that maybe one or two people in the audience would get and think was funny.

So going back to the quote that Tom Webster gave, and this time I'll unbastardize it and say it the way Tom said it. Norm knew who he was for and why they were there. But he also knew that wherever he was performing or applying his craft, people who were like who he is for would be somewhere in the audience. Maybe only one or two of them, maybe a whole lot of them. But those were the people Norm was performing for, not everyone, not the audience at the moment.

He was just talking to people who appreciated his style because they were always out there somewhere in the audience. And you know what? They'll always be out there. So thank you very much for the memories, Norm MacDonald. You'll be missed.

If you got value out of this episode today, please consider passing some of that value back to me. You can do that a few different ways. One is BuyMeACoffee.com/evoterra. Or you can go to podcastpontifications.com/support. Is that right? No, it's not right - podcastpontifications.com/sponsor. But you know what I'm going to do? I'm going to go make that support link now in case somebody actually tries to do it because that's the kind of power I have.

All right. That's it. I shall be back tomorrow with yet another Podcast Pontifications. 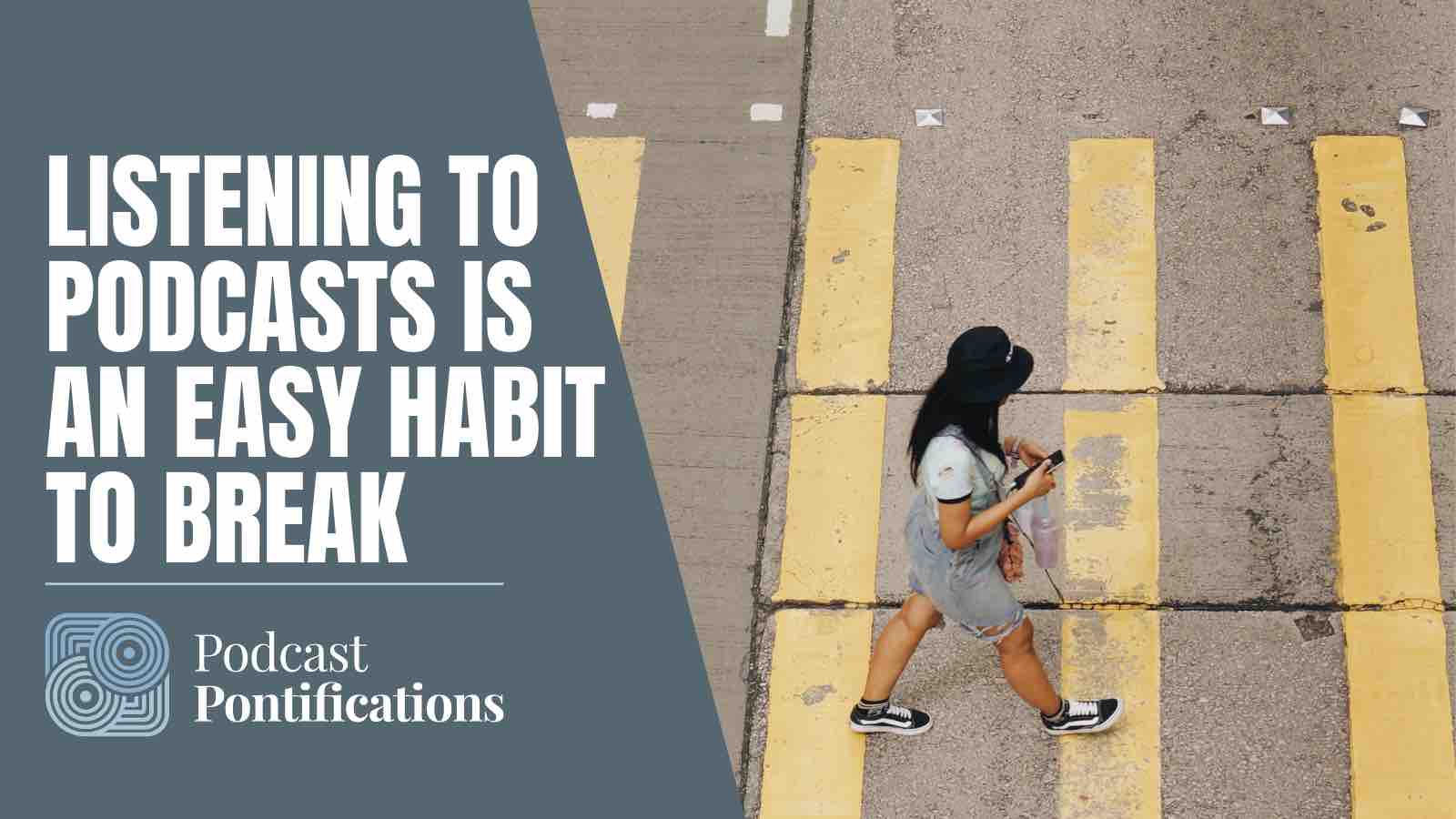 Listening To Podcasts Is An Easy Habit To Break

Consistently releasing episodes on a set schedule is a good idea to keep your overall audience happy. But that doesn’t mean that every individual listener is listening to every individual episode. Is that OK? 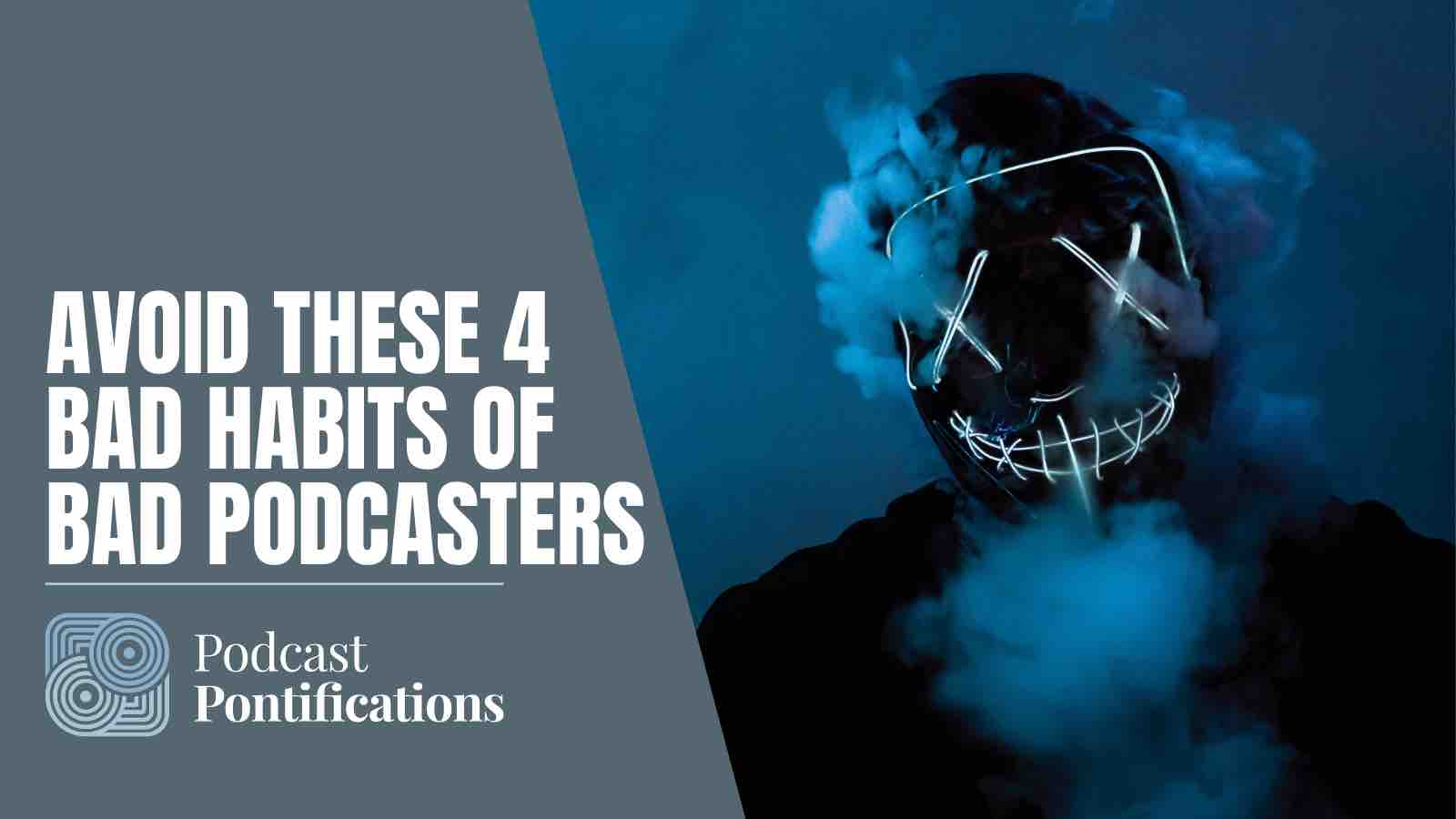 It’s hard to predict which podcaster will be successful. But it’s fairly easy to see who won’t make it for long just by looking at their actions. Or inactions. Here are some of their bad habits for you to avoid. 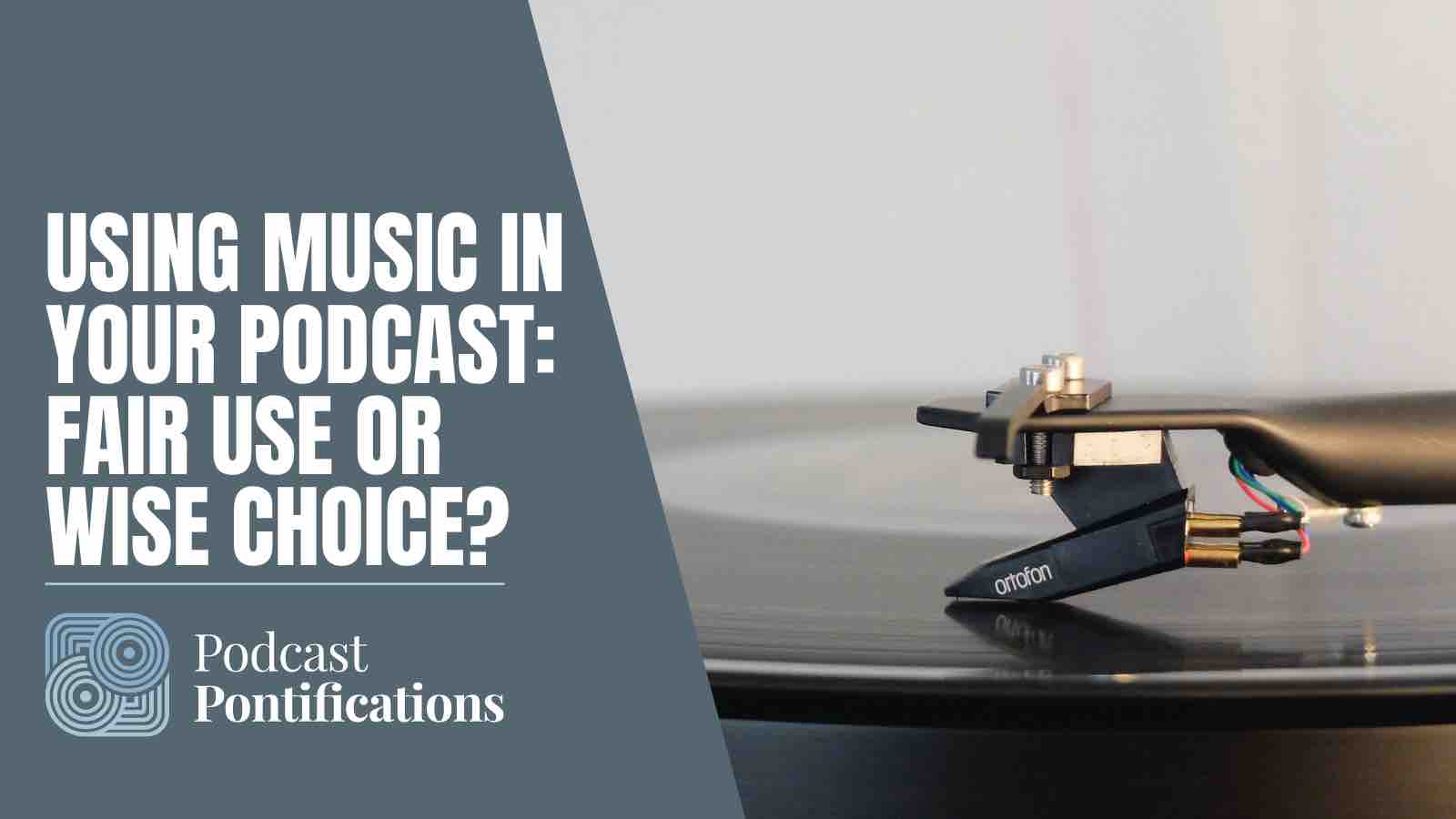 Using Music In Your Podcast: Fair Use Or Wise Choice?

Can you use commercial music in your podcast? Few questions shut up most podcasting pundits more quickly. But the better questions are “What’s the worst that can happen?” and “Will this ever change?”