What should your reaction be to the rumored changes coming to Apple Podcasts, Spotify, and very-late-to-the-audio-party Facebook?

My suggestion is that you have no reaction.

As much as I enjoy speculating ahead of announcements like these, I’ve some very real concerns that my enjoyment is causing you way too much anxiety and stress. I hate the fact that my breathless enthusiasm for potential changes has a negative impact on the mental health of anyone.

So if you can, suspend your anxiety and worries for just a moment and I’ll let you in on a little secret: Whatever is announced by these big players today, tomorrow, or whenever; there probably isn't anything at all for you to do immediately to better position your podcast to take advantage of them.

And I’m very happy about that!

You’ve likely heard reports from Apple Podcasts beta testers that there’s a new “frequency” badge coming. The thought is that Apple will look at the release dates of episodes in a feed and then determine what badge to display next to the show, ostensibly helping potential listeners understand the episode release schedule they can expect when they follow.

Seems a simple enough thing to do, right? Only it isn’t.

What about my podcast, which comes out four days a week? Will there be a “4x weekly” badge? And what happens when I take my more-than-a-month break twice a year? How will that impact Apple’s calculation on what badge to assign to my show?

What about serialized, self-contained podcasts that are complete and will never have another episode added? Will it say “n/a”? Or will Apple finally use the <itunes:complete> tag that’s been in their spec for more than a decade?

I don’t know, because no one knows. Which means, at this point, you should not care. Remember, this is a value Apple determines based on your show’s feed. It’s not a new tag that your hosting provider will have to incorporate. It’s just going to appear, and there’s nothing you can do about it.

You may recall a few years back with Apple Podcasts added a new “Hosts & Guests” section, and everyone flooded their hosting provider (me too) asking when they’d be able to play. But no, it wasn’t ever anything Apple Podcasts was working directly with hosting providers on. It was (and of this writing, still is) yet another partially-implemented feature that was only offered to a small percentage of shows. All of that anxiety and hand-wringing for nothing.

Or think back to when Spotify added podcasts to their app and how absolutely terrible our carefully crafted episode details displayed in the app. Those giant blocks of text with all formatting and URLs stripped out looked like garbage, and many anxious podcasters were understandably looking for ways around the problem.

But… how? Were we to hack together a different RSS feed and send it only to Spotify? That’s not very sustainable. Luckily, Spotify realized their poor implementation and adjusted, and now episode details display much better.

It’s rumored that Facebook will announce some sort of a new discovery and distribution service in conjunction with Spotify. Ok, that sounds interesting, as Facebook has huge reach. Some are saying this will finally fix podcasting’s discovery problem. But I’m not convinced podcasting has a discoverability problem. Your podcast may not get discovered enough for your liking, and this new service—whatever it is and whenever it rolls out—may help with that. But there’s nothing for you to do ahead of that announcement! So don’t work yourself into a lather just yet.

Yet all those shows still play fine. Each of them is easily discovered by searching for their name. They work. Your show will continue to work too, even if you choose to completely ignore these pending announcements and do nothing—if there’s anything to do at all.

You keep on keepin’ on, producing the podcast content that you want to produce. Yes, make sure your fundamentals are covered, and make sure you’ve claimed your show on all the important platforms, in the rare chance that they do require more information than your RSS feed or media hosting company provides.

It's unlikely at any changes announced will force you to make some drastic change to your show to stay active. It hasn't happened yet. And if it does, I promise you’ll hear about it.

Do you have an overly anxious podcasting friend who tends to get wound up over this stuff? Send this episode to them and tell them it's okay to just relax. It’ll take care of itself, and they have more important things to worry about.

And if my words have removed some of your stress, you can thank me by going to BuyMeACoffee.com/evoterra and buying me a virtual coffee.

So remember to breathe and think about other things for the remainder of today. If something was earth-shaking (and I really don’t think it will be), I’ll tell you tomorrow on yet another Podcast Pontifications.

Podcasting pundents and journalists are busy releasing speculations ahead of announcements from Apple Podcasts, Spotify, and even Facebook. But are those opinion pieces helping or hurting podcasters?

What should your reaction be to these upcoming changes from Apple Podcasts, Spotify, and, very late to the audio party, Facebook? May I suggest that you have no reaction? As much fun as it is for me and others to speculate ahead of these announcements, I'm really concerned that they're doing little beyond increasing anxiety and stress amongst, well, you.

Now, that's an unfortunate side effect. And honestly, I hate the fact that my breathless enthusiasm, which I get into quite a lot here, might negatively impact your mental health. I don't like that.

Now, here's the reality, though. So I'm going to strip it all away if you're feeling anxious and worried about that. Look, whatever these moves made by the big guys that are coming out today, tomorrow, whenever, whatever they are, there probably isn't anything at all for you to do immediately to better position yourself to take care of them. There isn't. I'm sorry. Well, I'm not sorry. I'm happy. I'm really happy that there's not anything you have to do to take care of these things immediately. That's just not how they work.

It's rumored, and likely going to happen, we've seen it in the beta versions of these things for example, that Apple is going to be adding a frequency tag and displaying that next to your podcast, my podcast, everyone's podcasts, so that when someone comes into the Apple Podcasts ecosystem and is looking for shows and looking for content they can grab when they get to the podcast, they'll have a little frequency tag, probably daily, weekly. Great.

And that's easy enough to do. Simple math can determine, looking at the feed, how often episodes are released, what label do we put on there. But is it that easy? I mean, what's happening to seasonal podcasts like mine? First off, mine's four days a week. Is that a tag, four days a week? Or is it a daily or almost daily? What happens when I go on break, which I'm going to do the month of June and, for this year, that first bit of July because of travel, I'm taking off. So what happens then?

What about shows that are truly serialized, not just seasons, but serialized and done? What's the release frequency of a podcast that was complete in twelve episodes and they're all released? You don't know, we don't know, no one knows. And here's the thing, you don't care either. This will be a determined thing. It is not a tag you can go into your hosting company and set.

Remember when Apple, it was a big stink, what, two years ago now? About hosts and guests, this new display section Apple Podcasts would have for certain shows that would show the host and the guest and pictures of them. Huge amounts of hand-ringing around that. I might've been part of that. We have no control over that. There's no tagging for that. That's something that Apple decides to do and then gets in touch with you, the podcaster, if they want you to do that. Nothing we can do.

Remember how bad our episode details looked inside of Spotify when Spotify first started adding podcasts to them? I mean, what were you going to do? There was one giant block of text. It didn't  respect any URLs you placed in, didn't do bullet points, it just looked like garbage on Spotify. Everyone was freaking out about it, but again, what are you going to do? Hack together a totally different RSS feed and send that to Spotify? Please. Would have been a bad idea because now they've fixed that.

Again, without any real effort from your part. Plenty of other podcasters are going, hang on. That got them to make a move. Facebook is speculated to announce some sort of a new discovery and distribution service we're told, and that's in conjunction with Spotify. Interesting. Will this finally fix podcasting's discoverability problem?

Well, I'm not convinced podcasting has a discoverability problem, so I don't think it was ever broken to be fixed. So likely not. It's probably going to be much more like a Clubhouse offering than truly podcasting, even though all speculation talks about podcasting. But remember, you didn't quit podcasting to start your Clubhouse rooms, did you? I didn't think so.

Sure, make sure your fundamentals are covered. Yes, make sure you've claimed your profile on all of those platforms and you can log in in the event they need some extra details from you. But they probably don't.

Because it's unlikely that any changes these guys make will force you to make some drastic change to your show to stay active. It hasn't happened yet. And if it does, I promise we'll let you know.

So send this episode to one of your very anxious podcasting friends and tell them it's okay to just relax. And if you love the content and the idea that I just told you, you can sit back and relax. We got this. The world's not going to end. Please go to buymeacoffee.com/evoterra and do that. Buy me a virtual coffee.

Alright. Relax, chill out. Don't kill yourself today or tomorrow to find ways to listen to these announcements. We'll let you know if there's anything major you need to do, alright? And I shall be back tomorrow with yet another Podcast Pontifications. 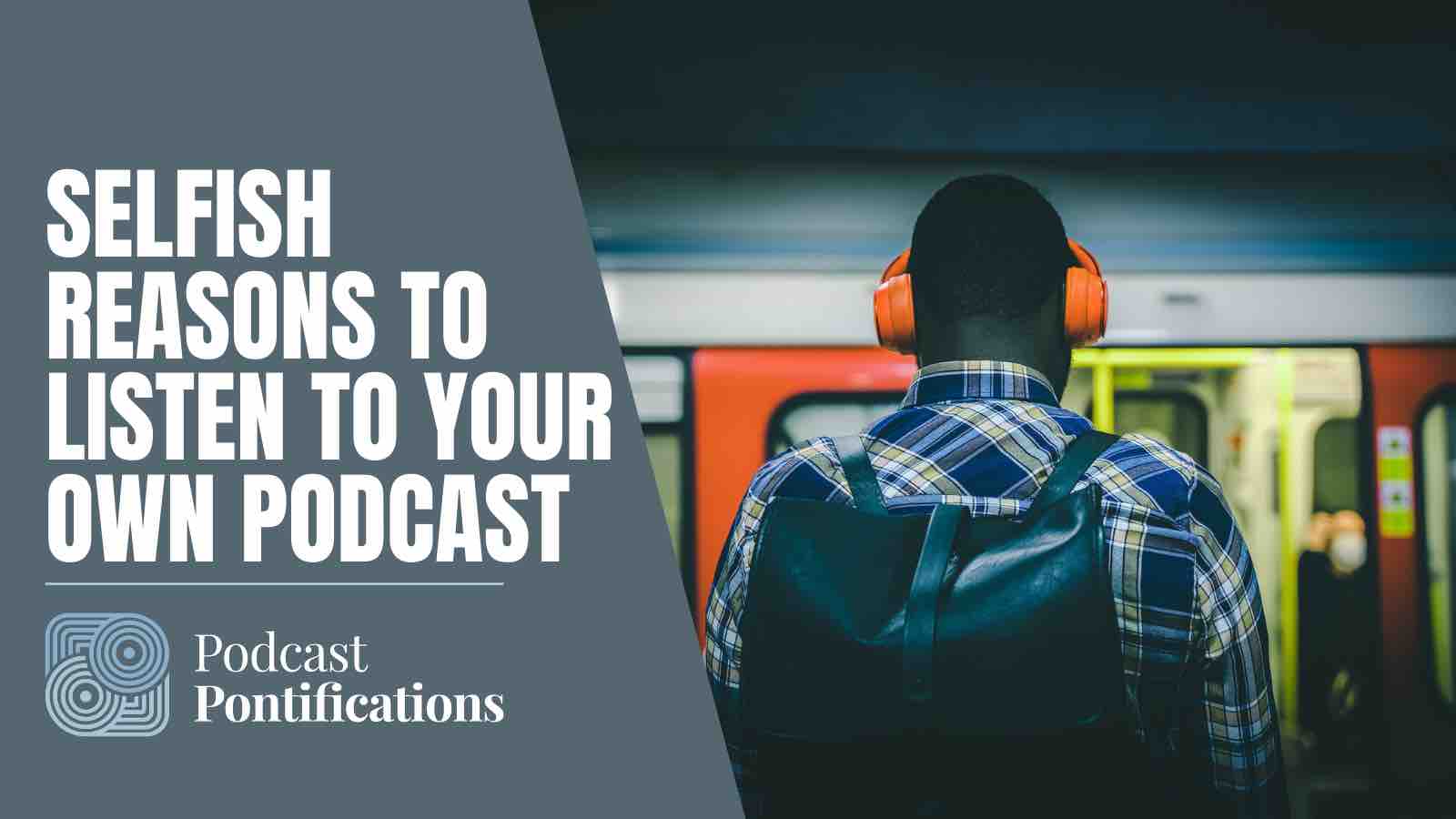 Selfish Reasons To Listen To Your Own Podcast

Appealing to the needs of your listener base is key to making a successful podcast. But there's one listener who has slightly different needs than the rest. Make sure you're fulfilling their needs too. 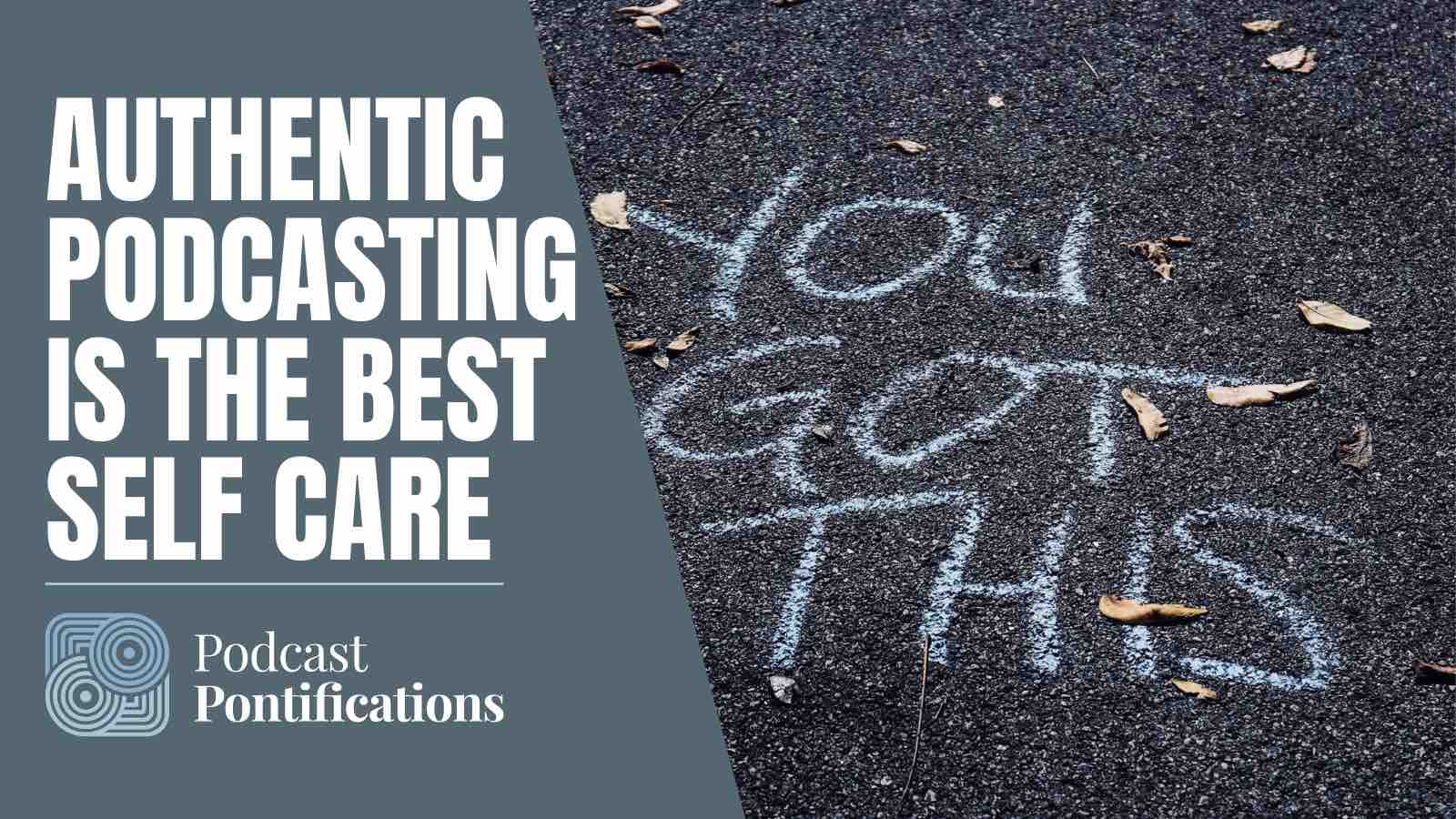 Authentic Podcasting Is The Best Self Care

Worrying about growth, new tech, and other podcasting distractions can cause you to forget that your audience is your audience, not a nameless pool you have to fight for week after week. Lean into them. 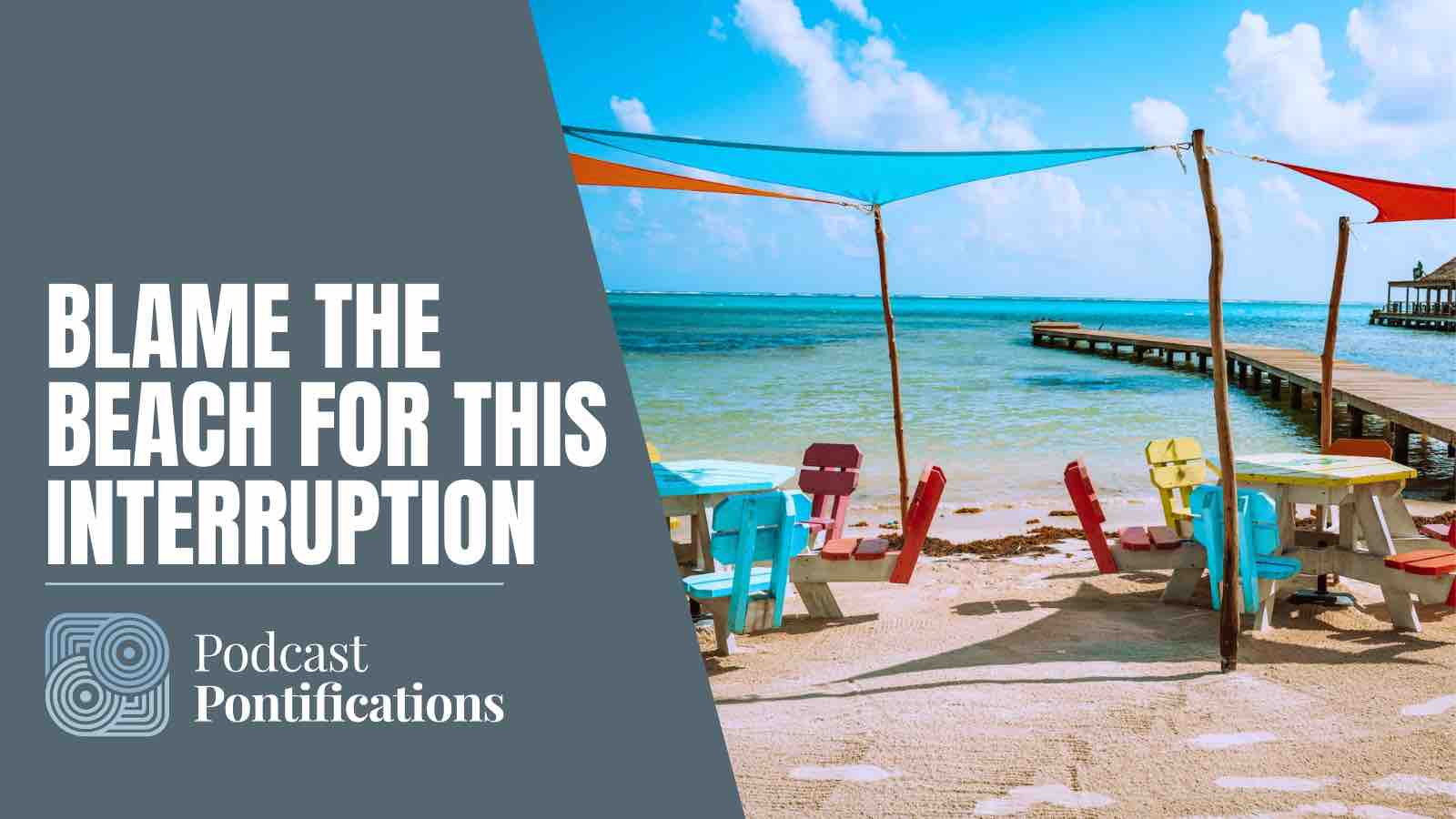 Blame The Beach For This Interruption

There are those who would have podcasters believe that they have to grind out episodes, day after day, week after week, month after month, and never take a break. I am not one of those. ‘Cuz that’s dumb.