What's the value of the podcasting industry?

If you have any idea at all (no shame in not), then you'd probably peg the number at around $1,000,000,000—a billion dollars. And not just because it's a nice, big number, but because that's what the IAB projects U.S.-based podcasters will see in advertising income this year. A billion dollars. Or perhaps you recognize there are 192 other countries, and you've seen global podcast ad revenue projections of a little less than $1.4 billion this year.

But those values are just revenue projections podcasting sees from advertising. That's not the economics of the entire podcasting industry. Nowhere in those figures are the money people like you and I spend on podcasting, from buying new mics or other equipment, paying our hosting providers, hiring staff or contracting with freelancers, or paying our way to attend a few podcast conferences.

Second question: Who are the big players in the podcasting industry?

You probably said Apple, Spotify...maybe Wondery. The usual suspects. But you probably didn't even bother to consider TuneIn or Soundcloud, did you? You know they exist. You might even use them, but come on...they aren't really that influential in the real and true podcasting industry, right?

We have that opinion of those companies because we're inside podcasting, caught up in all the baggage, history, and punditry that comes with the territory.

We have an incomplete picture because we're swimming in it all the time.

But for big brands and industries on the outside of podcasting looking in, they need a different and more complete perspective.

Podcasting Is Bigger To The Outside

In total, the overall value of the podcasting industry is currently calculated at a little more than $14 billion.

Not just the $1–1.3 billion from ad sales. But fourteen billion dollars of overall value and worth for the podcasting industry as a whole. And podcasting's estimated value is projected to grow to nearly $95 billion by 2028. 2028 is just six years away.

When big brands and industries not yet in podcasting look at the opportunity podcasting presents, they absolutely take into consideration many companies we've collectively decided to poo-poo, like TuneIn and Soundcloud. It doesn't matter what we, the outspoken podcasters, feel about those companies—if we feel anything at all. Both of those examples, and probably untold others we're ignoring, are clearly part of the overall podcasting industry. And not just a part, but actually quite large portions of the machinery that power the $14 billion podcasting industry.

Should We Buy Into This Bullshit?

Making an accounting of the total value of any market or industry is by nature imprecise. Like all industry reports or economic forecasts, it's only important that they be directionally correct, using the same/similar indicators that represent the health and viability over time.

"Advertising...[is] the only revenue-generating method...[but] it has failed to gain traction as the audience refrain from listening to advertisements between ongoing content."

What? Are they not tracking the huge growth in podcast advertising? Clearly, that's a miss, right?

And we find it easy to dismiss reports that contain blood-pressure raising statements such as:

"[T]he solo podcast format [has] advantages such as ease of use and minimal investment, which mainly include a microphone and basic editing tools."

There they go again, propagating the myth that podcasting is cheap and easy. [groan]

We jaded podcasters read these reports, and we often dismiss them out of hand when we see clueless statements like that. It's no wonder we think reports like this are bullshit.

But those on the outside looking in? They don't think these reports are bullshit. They greedily eat up reports like this, gathering more data to support their eventual investment in our space, which, in turn, incentivizes more market analysis reports to be written by other analytics firms.

And so those of us inside the industry need to be reading these reports as well. Or at least the executive summary! Because we need to know what those outside looking in find so appealing about podcasting. Because as the podcasting industry appears more appealing, we'll see more interest, more money, more content, and yes, even more listeners.

Won't Someone Think Of The Indie Podcasters?

Let me address that by making a blanket statement: I'm not worried about the indie podcaster.

I'm not worried because I don't much buy into the "corporate podcasters are ruining podcasting and excluding indie podcasters" argument. I find it a bit specious, truth be told.

But I'm not dumb. I wholeheartedly agree that corporate-backed podcasts and/or networks have the resources that enable them to outcompete most indie podcasts. That's true

And one ray of hope: each of us can point to plenty of "indie success stories" in all those categories. Podcasting included.

Do indies struggle? Undoubtedly. Are indies afforded the same access as corporate-backed properties? Not often, no.

But some indies make it. And some thrive. So too, will indie podcasting.

Nearly twenty years in, and many podcasters still have trouble thinking of podcasting as an industry. But our problem does not plague the cash-flush brands looking to enter our industry. Whose perspective will win out?

How big is the podcasting industry? Go ahead. Answer that yourself. Now, if you have an answer, it's probably something like a billion dollars. That's the number the IAB gives out for U.S. advertising sales in 2021.

You can make that a little more than 1.4 billion if you factor in the entire global advertising estimates, which is probably a good idea for us to do. But that's just revenue podcasting sees from advertising. That's not the entire podcasting industry. So it's rather missing out, if you will, on everything that you and I spend money on, things like microphones and hosting providers and content creation and podcast conferences.

Now, second question, who would you say are the big players in the podcasting industry? You probably said Apple, Spotify, maybe Wondery out there. But you probably didn't bother to consider TuneIn or SoundCloud, did you? Yeah, me neither. But that's because we're inside podcasting with all the baggage, and the history, and punditry that comes with that. But big brands and industries on the outside of podcasting looking in need a different perspective.

So, how shocked would you be if I told you that the total size of the podcasting industry is somewhere north of $14 billion? Fourteen. Not one.

That's an estimate of the total size of our industry, and that estimate is projected to grow to nearly $95 billion in 2028 - six years. That, my friends, is a healthy growth curve. And when big brands look at podcasting, they absolutely look at the companies we've collectively dismissed or decided to poo-poo like TuneIn, like SoundCloud. It doesn't matter that we podcasters feel those companies aren't worthy of being in the podcasting space, if we feel anything at all about those companies. Both of them, and probably lots of others we are ignoring, are clearly part of the industry of podcasting, not just a part, actually a large portion of the machinery behind the total podcasting industry.

Let's go back to our perspective for just a moment, the jaded podcaster, if you will. We're going to see more of these outside-looking-in reports as this decade progresses. And when we jaded podcasters read these reports from people outside of our industry, we're going to dismiss them just completely out of hand. How can we take seriously a report that says, for example:

"Advertising...[is] the only revenue-generating method for podcasting... [but] it has failed to gain traction as the audience refrain from listening to advertisements between ongoing content."

Well, fine, but we know that's not true. Podcast advertising has grown greatly. Or what about blood-pressure raising statements like:

"[T]he solo podcast format [has] advantages such as ease of use and minimal investment, which mainly include a microphone and basic editing tools."

Once again, propagating the "podcasting is cheap and easy" myth.

So, yeah, reports like this are utter bullshit when looked at from the inside. But they're also quite beneficial for us, even as we hate-read them. And in fact, that is exactly what I recommend you do. Hate-read the report that I have linked in the episode details of this show. Then, once your anger has subsided, or your mirth has subsided, read it again. This is what our industry looks like to the outside world. It's a very appealing look, which is bound to bring in more interest, more money, more content, and more listeners.

I can hear you saying it right now, "What about the indie podcasters Evo?"

And with that, I shall be back tomorrow with yet another Podcast Pontifications. 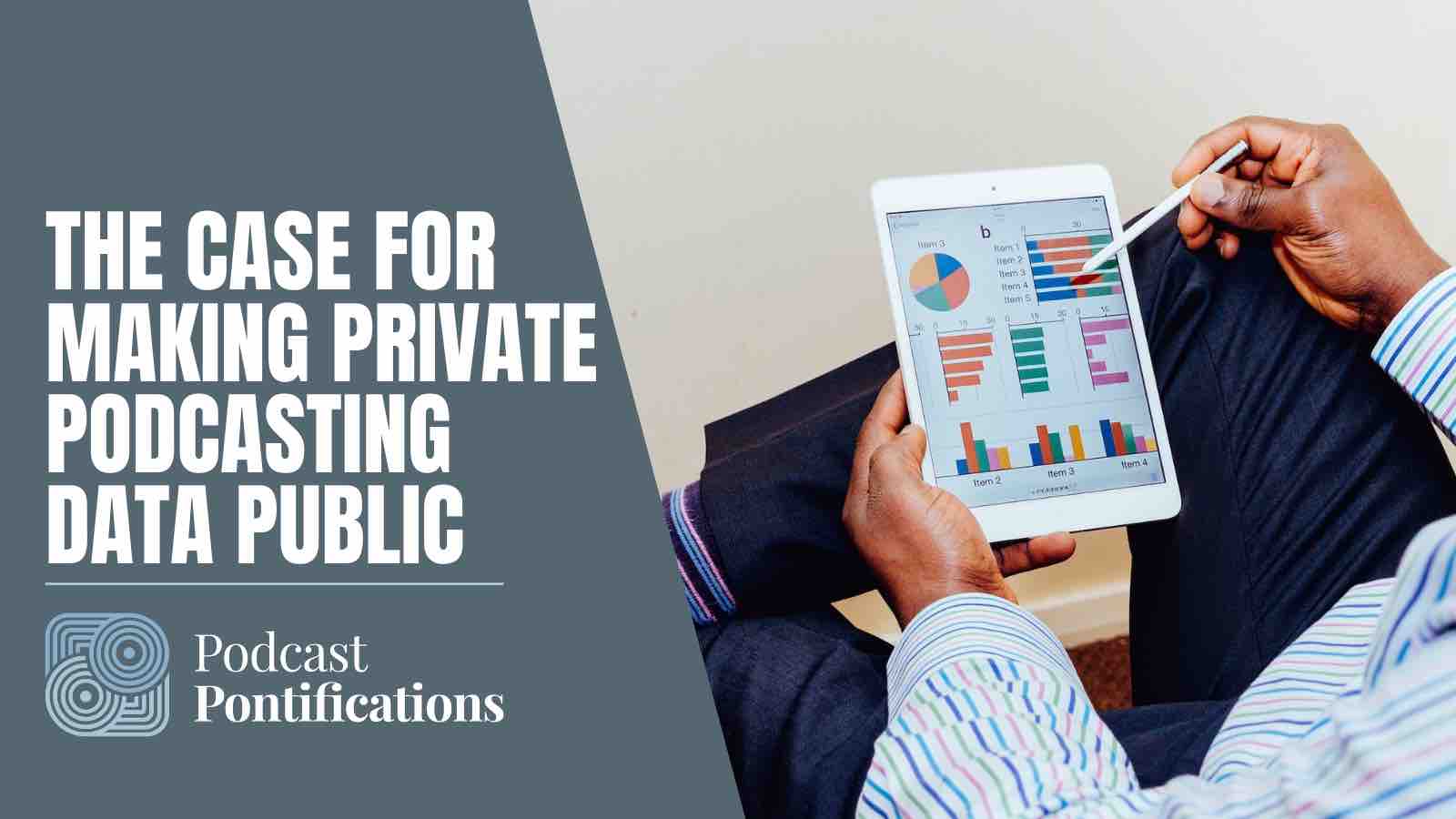 For as public a medium as podcasting is, a lot of information about specific podcasts is private. But private doesn't necessarily mean secret. How different would podcasting be were we more forthcoming? 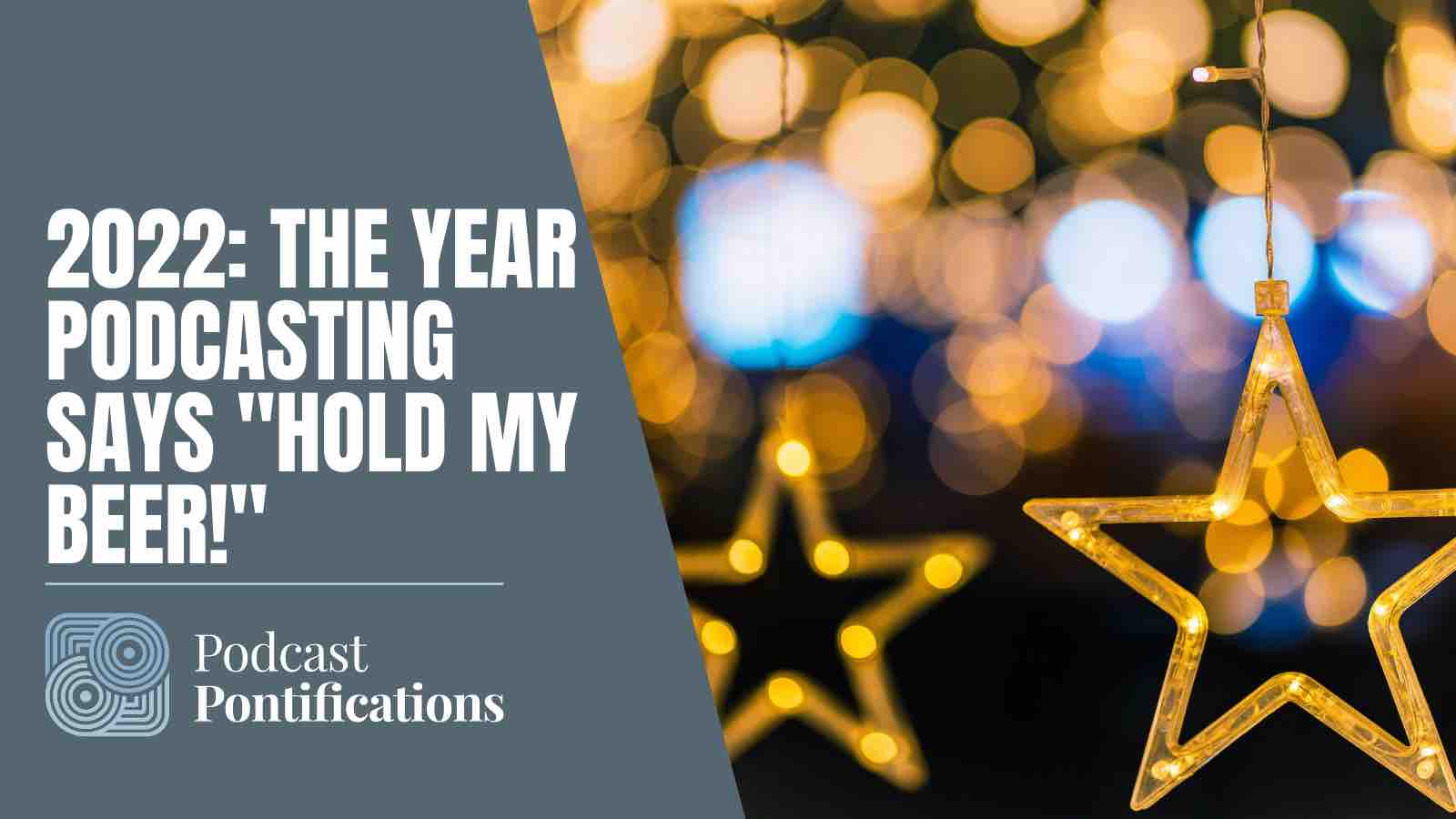 My Long Winter's Nap is over, and the podcasting landscape has never looked brighter. And maybe a little different? No, a lot different. I'm convinced the changes are just getting started. Hold onto your butts! 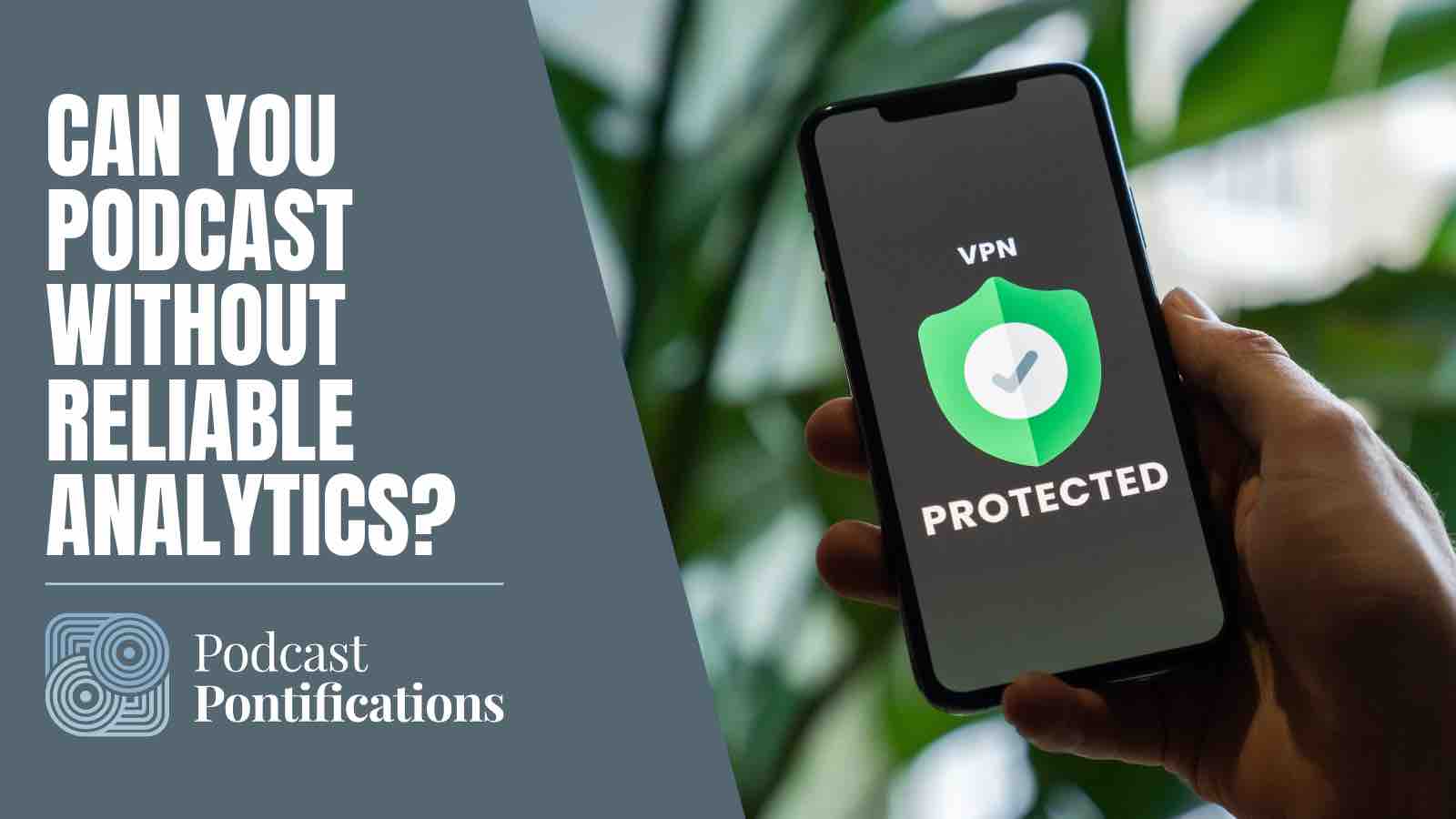 Can You Podcast Without Reliable Analytics?

If reactions to very real privacy concerns remove our one way to track downloads, it’ll wreck the podcast advertising industry. But what about everyday podcasters who don’t rely on impression-based ad sales?